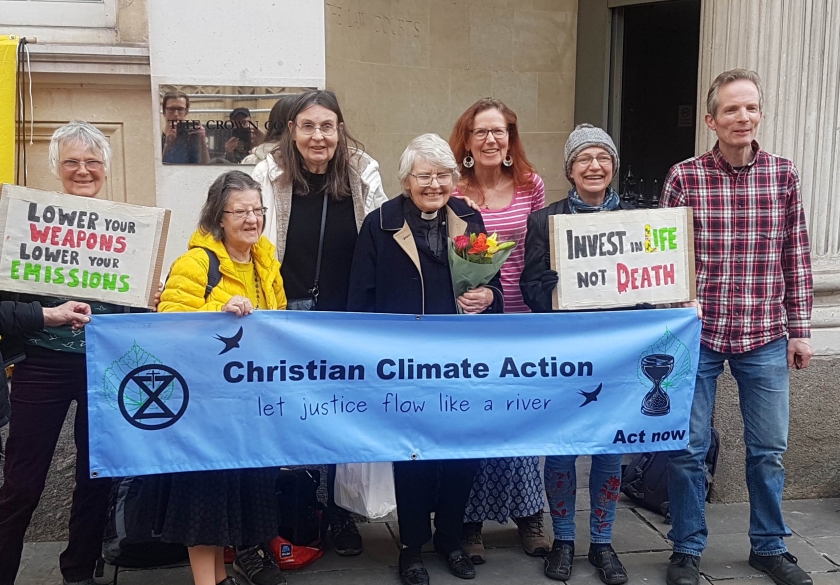 Climate activist Reverend Sue Parfitt has had a conviction for obstruction overturned by a judge at Bristol Crown Court this afternoon.

Speaking from outside the courthouse yesterday (Thursday, March 24), Rev. Parfitt, who is known for her climate activism with XR, Christian Climate Action and Insulate Britain, said the decision by Bristol Recorder Judge Sellers was a vindication of her right to protest.

Rev. Parfitt was convicted of obstruction last June at Bristol Magistrates Court for her role in an XR action in December 2020, but requested a retrial following the supreme court decision, made one week before her conviction, known as the Ziegler ruling, which is fast becoming a staple of protest law.

On December 11, 2020, Rev. Parfitt took part in an XR action where she and others blocked access roads to the Ministry of Defence site at Abbeywood, north Bristol. Parfitt blocked part of an access road to the site by locking-on with another protester, preventing staff and services from accessing the main building.

Parfitt was arrested after around four hours in the road and was convicted of obstruction of the highway following a trial in June last year, during which she represented herself. Parfitt was ordered to pay a £1,500 fine.

During yesterday’s (March 24) trial, neither prosecution or defence, which was paid for by XR UK, disagreed on the facts of the action and there was a short questioning of Parfitt on her motivation for undertaking the action.

Allowed to stand in the witness box on account of her hearing difficulties, Rev. Parfitt wore a large silver crucifix around her neck and when she sat down her socks were shown to have pictures of Santa on them. She was supported in the gallery by a small crowd of fellow activists.

Asked by Mr David Rhodes, defending, to explain her actions, Rev. Parfitt explained how the blockade was timed to coincide with the fifth anniversary of the Paris Climate Agreement and that disruption was minimised by the fact that the protest took place during lockdown when most staff at the Abbeywood site were working from home.

Parfitt also argued that the roadblock did not prevent pedestrians or cyclists accessing the site and that there is a public car park nearby to Abbeywood and that staff could park there and walk the remainder of the way.

In response, Mr Ed Counsell, for the prosecution, pointed out that although few workers were on site that day, those who were presumably needed to be there and couldn’t work from home.

Video footage from police body-worn cameras showed seven vehicles attempting to access the site and being turned away by the protesters’ roadblock. The prosecution asked Rev. Parfitt if the lorries being blocked were checked for how urgent their deliveries were. Parfitt replied that it was not her task to do so.

Just days before Parfitt’s conviction in June 2020, the supreme court returned an important ruling in the case of activists who had blocked a road to disrupt the DSEI arms fair in London in 2017. Now known as the Ziegler ruling, it holds that obstruction can, in certain circumstances, be considered lawful.

In particular, the supreme court found that the DSEI activists’ actions were peaceful, involved no other offences than obstruction, were targeted at the fair, and of limited duration. Conviction was therefore seen to be a disproportionate infringement on the activists’ rights under the European Convention on Human Rights.

The Ziegler ruling is fast becoming a staple of legal cases arising from protest. In December last year, three members of Palestine Action were acquitted after the magistrate determined that the prosecution had failed to prove that conviction would be proportionate with the activists’ freedom to protest whilst six members of XR were acquitted by a jury for climbing onto and glueing onto a Docklands Light Railway train in London.

Most notably, the Ziegler ruling featured in the defence of the Colston 4, who were acquitted in January this year, with the jury being required to consider whether conviction would be proportionate with the defendants’ right to protest.

It was the Ziegler ruling that prompted Rev. Parfitt to seek a trial in the belief that she too might argue lawful defence.

Speaking before yesterday’s trial, Rev. Parfitt, who celebrated her 80th birthday yesterday, had confidence in winning her case. ‘I think there’s a chance. I wouldn’t be doing it otherwise,’ she said. She went on to say that ‘in a democratic society we have to tolerate a degree of lawful disruption.’

The verdict in yesterday’s retrial came down to whether or not the Ziegler ruling applies to Rev. Parfitt particular case of the December 2020 roadblock. In practise this meant determining whether the protest was proportional to the rights of other road users and whether the arrest itself was proportional to Rev. Parfitt’s right to protest under Article 10 of the European Convention on Human Rights.

Ultimately, Recorder Sellers determined that the prosecution had not proven that Rev. Parfitt’s use of the highway was unreasonable and that therefore her arrest was disproportionate in light of her right to protest under Article 10.

After the verdict had been read and the judge retired, Rev. Parfitt, visibly relieved, left the courtroom to applause from her supporters.

Speaking afterwards, Rev. Parfitt said whilst ‘civil disobedience is accepting the consequences of our actions,’ it is also important that justice be seen to be done and that yesterday’s court case ‘vindicates’ the Ziegler ruling.

Rev. Parfitt, who has also been arrested for her involvement with Insulate Britain, said she will continue her activism and that civil disobedience is necessary in the context of the climate emergency. ‘We’ve got no time to transition in a nice, gentle way,’ she said, adding that we need to be reducing carbon emissions now.

Asked if she considered herself a role model for others, Rev. Parfitt said: ‘This is the only way to be at peace with ourselves. You’ve got to follow your own conscience.’