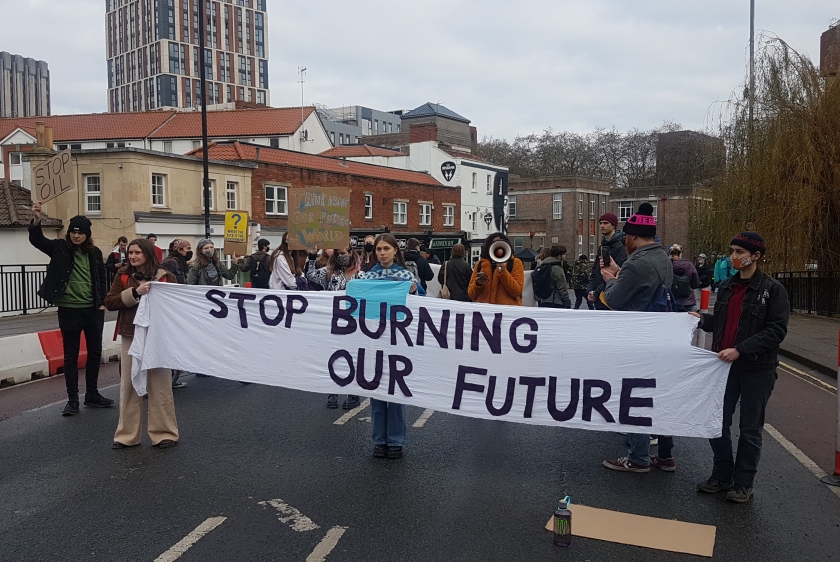 ‘Hello. We are sorry for the inconvenience today. We will only take up six minutes of your time.’

These were the words, spoken through a megaphone, with which Youth Climate Swarm (YCS) announced their entry onto Bristol’s protest scene.

Having emerged in London in December, it was only a matter of time until the movement spread to Bristol, and on Prince Street Bridge at 12.30pm on Saturday (January 15), 40 YCS activists and stewards stepped onto the road at their first action.

The protest took place at three sites across the city centre, with activists using the tactic of swarming – blocking a road on and off in six minute intervals – on Prince Street Bridge, Redcliffe Street, St Phillips Bridge and Fairfax Street.

The use of swarming is intended as an escalation of tactics from those previously employed by groups such as Youth Strike 4 Climate.

Speaking before the protest began, YCS member Barnaby said that: ‘We’ve shown time and time again that marches don’t do anything.’

He went on to say: ‘We need to up what we’re doing. We need to be causing some disruption in order to get the changes that we need.’

The intention to disrupt was balanced by a desire for the action to be fun. Some of the protesters were as young as four, and the mood was calm throughout the swarming. Walking between two swarm sites one protester joked: ‘This feels like a school trip.’

Traffic levels at the locations of the swarms were relatively low which helped the action remain non-confrontational, although it did mean that at times the protesters were reading their demands to empty roads.

Speaking to TBA from the roadblock on Redcliffe Street, YCS activist Maria said that she was ‘shocked’ that she had to take to the streets in protest, but, she added, ‘unfortunately we do because nothing is happening, or not enough is happening, to prevent climate and social breakdown.’

She said that she is frustrated by the government’s inaction, adding: ‘The government isn’t doing what they should be doing, which is looking after future generations, looking after everyone. That’s the point of government, and it’s very frustrating that we have to demand something that should be happening anyway.’

Another protester, who wished to remain anonymous, said that he joined the action to encourage others to take action themselves.

Lots of people care about the climate emergency and want to see action, he said, but: ‘It’s numbers that’s going to win over in the end.’

‘I think it’s important even just if you’re there for an hour at the protest, do come and stop by and join us in solidarity,’ he added.

YCS have three demands. They call on the government to stop all new oil fields opening, to insulate all of Britain’s housing, starting with social housing, and to provide free public transport for all.

The last demand has a particular pertinence in Bristol as free public transport for 16-18-year-olds in 2021 is a stated goal of the One City Plan, one that was never delivered.

The demand to insulate Britain is inspired by the civil disobedience group of the same name, however, YCS point out that they are not affiliated with Insulate Britain and simply want the same goal.

After finishing their last roadblock on Fairfax Street, the protesters voted to march to College Green and join the Kill The Bill demo happening simultaneously.