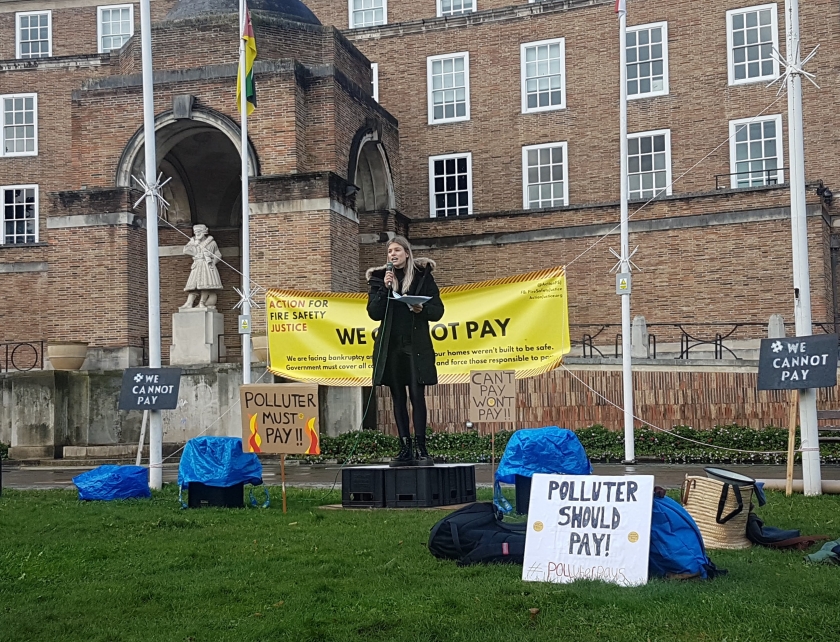 Protest is often portrayed as a fringe concern, something for woke lefties with too much time on their hands.

Every now and then, however, a protest comes along that subverts that image, proving that protest is, and can be, for everyone.

Not the Usual Protest

Beginning at midday on Saturday (October 30), the rally attracted a modest crowd of around 70 people to hear speeches from local councillors and those affected by the ongoing cladding scandal, in which leaseholders are facing bills of thousands of pounds to fix inadequate fire-proofing on residential buildings.

Standing in increasingly strong rain, the crowd was notably different from a typical Bristol protest, with a mixture of ages and backgrounds, and not a pair of “gap year pants” to be seen.

Visibly nervous as she took to the stage of upturned milk crates, Camille’s voice shook as she told the crowd that this was her first ever protest.

Camille explained that she had come to the rally because she and her partner bought a 40% share of a flat in Old Market and yet are now liable to pay 100% of the costs of remedial work.

Opportunities to sell their flat fell through and they now feel ‘trapped in an unsellable flat.’

Camille said: ‘We are at the mercy of housing associations, managing agents and construction companies who are keen to pass down remedial costs onto us, innocent leaseholders.’

Camille’s experiences are familiar to many in the crowd, and across the country. After the events of Grenfell tower in 2017, thousands of residential buildings across the UK were identified as having unsafe cladding, posing a fire safety risk to those inside.

It has been estimated that there are 50 buildings in Bristol requiring remedial action of this sort with thousands of leaseholders now facing bills in the tens of thousands to cover the costs of remedial action.

Amongst them are Stuart and Sian, who joined Saturday’s rally. They bought a flat in 2014 which, at the time they said, won an award for its cladding. After Grenfell that same cladding was reportedly deemed “extremely hazardous to life.”

As Stuart pithily commented: ‘Fire has not changed the way it behaves in the last 10 years. Somebody at some point must have seen [the cladding] not be fit for purpose.’

As with Camille, Stuart and Sian have seen a potential sale of their flat fall through due to the cladding scandal.

‘Now we’re at the point where our lives are on hold,’ said Sian, who estimates that they will be stuck where they are for another three or four years.

Feeling trapped, and a desire to simply move on were common amongst people in the crowd.

Support groups for affected leaseholders, and rallies like Saturday’s, have proved a lifeline for many dealing with the emotional toil that navigating the cladding crisis can take.

Flynn, 22, was proud to be a homeowner at such a young age. ‘Bankrupt at 22 sounds less impressive,’ he quipped.

He said that he was glad of the support from his partners and from other leaseholders. If he’d had to fight this alone, he said ‘I’d have no idea where to start.’

When asked their thoughts on the rally itself, Andy and Nigel, who live in the same building in Bristol and are both facing remedial costs, spoke gratefully of the support it offers them.

‘It makes me feel better, that sense of solidarity with other people,’ said Nigel.

Protesters are calling for a Polluter Pays Bill that would ensure liability for inadequate cladding lies with the responsible party, be that developers or manufacturers, and not just leaseholders.

But speaking to those present on College Green on Saturday, it was clear that this was as much about solidarity as it was about a piece of legislation.

As Camille came to the end of her speech, her voice rose to say: ‘We are here today in solidarity with all of you to raise awareness, to say to the government: we cannot pay, we won’t fucking pay.’

The crowd cheered their approval in a swell of anger and frustration – ordinary people caught in circumstances they can’t control.

Priti Patel likes to demonise protest by pitching “protesters” against “ordinary people.” Such divisive rhetoric has enabled her to force the draconian Policing Bill through Parliament with a semblance of popular approval.

College Green on Saturday hosted exactly such “ordinary people” trying to go about their lives yet prevented from doing so by the gross injustice of the cladding scandal: young people trapped in what they thought would be starter homes; older people facing bankruptcy after a lifetime of hard work and saving.

What protests like the cladding scandal rally on College Green remind us why protest is such an invaluable right in the first place, and one that we must not allow to be taken away.