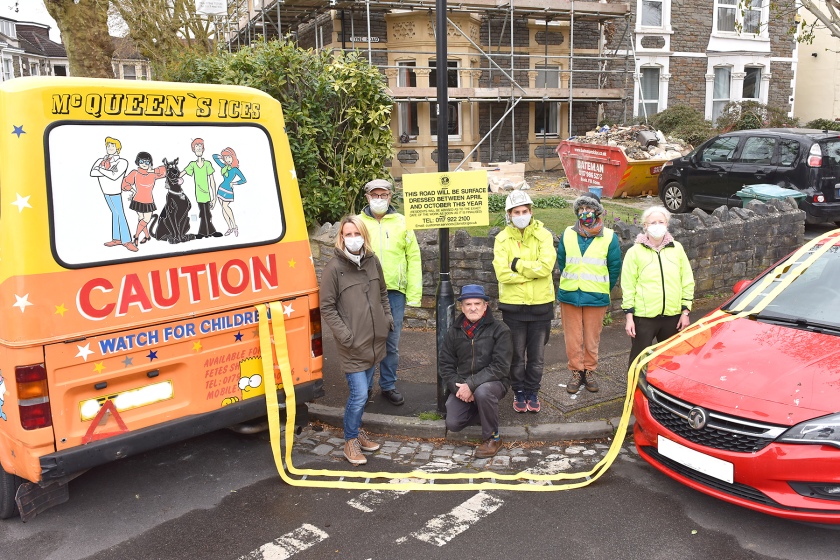 In Douglas Adams’ Hitchhiker’s Guide to the Galaxy, the alien Ford arrives on Earth and supposes cars to be the dominant species. A visit to Bishopston and St Andrews makes one sympathize with Ford’s misunderstanding.

To experience vibrant Gloucester Road, verdant St Andrews Park, or vistas of Bristol from Ashley Down on foot is to experience oneself scurrying between cars parked on double yellow lines, across dropped kerbs, and frequently on the pavement itself, all the while trying not to get run over on the busy streets. This is indeed a land where the private motor vehicle reigns supreme.

In January 2018, residents frustrated by the lack of parking regulation and enforcement founded Bishopston and St Andrews Traffic and Parking Group (BOSA), a community group dedicated to reestablishing the balance between vehicles and pedestrians on their streets.

For Kate Oliver, a member of BOSA, the problems begin with the fact the area is ‘wedged’ between bordering Resident Parking Zones (RPZs) – areas in which parking is restricted to permit-holders – which brings drivers into Bishopston and St Andrews looking to park for free. The Bristol Clean Air Zone (CAZ), scheduled to come into effect later this year, could compound this effect.

Residents, shoppers, and commuters all contribute vehicles to Bishopston’s crowded pavements, and Kate even reports incidents of people parking in Bishopston before taking a taxi to the airport as to do so is cheaper than paying for airport parking.

In the 16 years that Kate has lived in the area, the issue has only worsened, making walking on local streets ‘not just unpleasant but also potentially and quite often unsafe’ for vulnerable groups, including the elderly, the very young, people with sensory or physical impairments, and parents with prams, by forcing people to walk in the road.

The law regarding obstructing the pavement, for instance by parking across it, is nebulous. In consequence, enforcement is a rarity, with reported infractions being bandied between the police and the Council.

But beyond the irritation caused by such bureaucracy lies an important case of social justice. Kate argues that failure to enforce the rules against pavement parking and other obstructions is an issue of human rights, amounting to a violation of the Equalities Act 2010.

Surveys conducted by the Royal National Institute for Blind People (RNIB) show pavement parking to be the most common obstacle for blind people, and evidence from Living Streets, a leading UK charity advocating active travel, demonstrates how such obstacles act as a barrier preventing elderly people from engaging with their community.

From its inception, BOSA has lobbied politicians for changes. One such change – an RPZ in Bishopston and St Andrews – was the subject of a Council survey in November 2019. The responses showed that 61% of residents, excluding Gloucester Road, were in favour, with one quarter against any changes.

Unfortunately, the response rate of 39% was too low for the Council to take further action. However, in a letter responding to the survey, Cllr Kye Dudd (Cabinet Member for Transport) committed to ‘an ongoing conversation about the potential solutions’.

The recent Double Yellow Lines action saw members drape plastic yellow lines over illegally or inconsiderately parked cars in an effort to demonstrate the absence of regulations and enforcement. The action, and its strong visual impact, brought widespread media attention.

Throughout all of their activities, BOSA wishes to remain non-disruptive; Kate is at pains to highlight how individual motorists are not the target.

Unfortunately, as a consequence of ‘sloppy political leadership’ conversations that should be about accessibility and fairness are all too often framed as a “war on cars” in which drivers and cyclists fight ideological, and sometimes physical, battles for control of the streets.

Although accepting that traffic issues have always been hotly contested, Kate wants to move past the ‘invidious’ dichotomy of drivers vs non-drivers to create more inclusive solutions. After all, as Kate points out, ‘almost all car drivers are also pedestrians.. .and either have been children, or have become disabled, or may become elderly.’

Ultimately, reducing pavement parking is not about targeting anyone, but rather about constructing a compassionate and fair society that considers vulnerable people’s needs.

BOSA’s ideas of how to achieve this vision are straightforward. In the short term they wish to see existing regulations enforced against illegal parking, and are pushing for commitments from candidates in the coming local elections to this effect.

Longer term, they want to see a ‘more comprehensive and more holistic’ plan across the city, especially as the Clean Air Zone comes into effect later this year, integrating Low-Traffic Neighbourhoods (LTNs) and new or extended RPZs.

Two mayoral candidates have so far given their support to LTN pilots over the next four years, but this is ‘too little, too late’ argues Kate, pointing out that pilots already exist and the evidence for the benefits of LTNs is clear.

This brings the conversation back to political leadership and the need, as Kate sees it, for courageous decisions that bring greater social justice.

As the mayoral election approaches, Bristol Cable’s Citizen’s Agenda shows traffic and parking as a top concern for Bristolians, along with air pollution, accessibility, and increased active travel opportunities. The next four years stand to be pivotal in the struggle for social justice on Bristol’s roads.

Correction: an earlier version of this article stated that pavement parking is illegal which is not true in all cases. In Bristol, obstruction of the pavement – defined as parking which fails to leave a one meter passage for pedestrians – is illegal. However, enforcement may fall to the police or the Council depending on a number of factors, including the presence or otherwise of Traffic Regulation Orders.