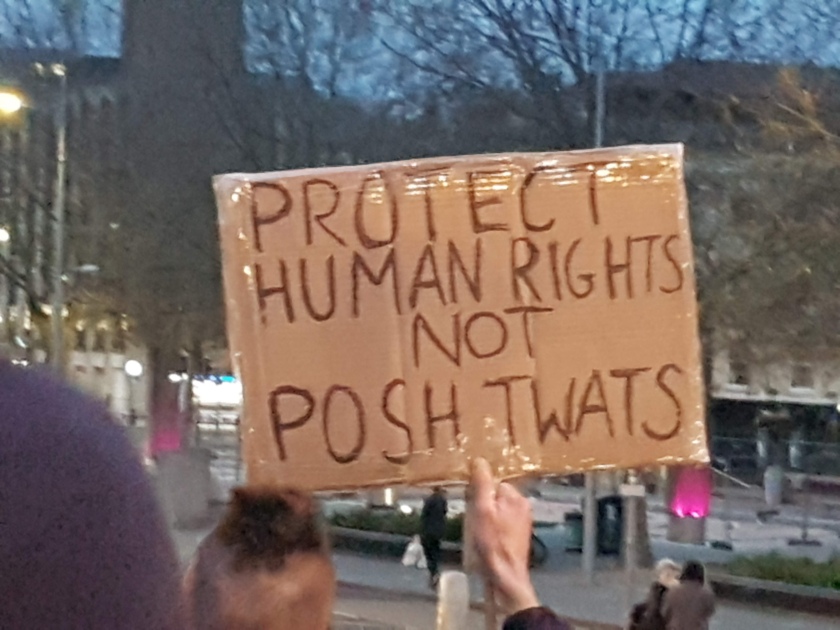 Kill The Bill. Protesters have carried those words through our city  for three weeks now, showing their opposition to the Police, Crime, Sentencing and Courts (PCSC) Bill. But who is your average Kill The Bill protester?

Mayor Marvin Rees, local MPs, media figures, and other notable Bristol individuals have created a narrative of protesters as ‘politically illiterate’ outsiders, whose unacceptable and shameful behaviour amounts to nothing more than ‘self-gratification’.

However, were you to attend a Kill The Bill protest, you would find a different story. Teachers, nurses, social workers, youth workers: these are the people who are taking to the streets.

This casts doubt on a further claim made by Marvin Rees, who has said that the protests ‘have nothing to do with the real work we are doing to tackle inequality’ in Bristol.

When the people taking part in the protests are the very same people who are working on the front line to engage with marginalised communities and reduce poverty and exclusion in Bristol, perhaps we need to question whether this “official” version of events is the correct one.

What if we let the protester speak for themselves about what Kill The Bill means to them?

Are they acting out of a desire for self-gratification?

Are the Kill The Bill protests irrelevant to efforts to alleviate poverty in Bristol?

Iris, who lives in St Pauls, has been attending the Kill The Bill protests. She works for the biggest youth work organisations in Bristol, engaging with children in highly disadvantaged areas of the city.

Against the marginalisation children in these areas face, Iris’s work focuses on empowering them with ‘the right to voice how they want to shape the future’, for instance by supporting children to deliver art projects or community projects.

It is this element of empowerment that Iris feels is directly threatened by the PCSC Bill, because the Bill makes clear that the voice of protesters matters less than the supposed rights of others to not be annoyed. The Bill would therefore risk undermining all of the work that Iris and her colleagues have done to empower young people to engage positively with their communities.

But as Iris tells me, the children she works with, being sometimes as young as 10 years old, don’t necessarily know about the PCSC Bill or what it means for them. As they grow up ‘they might not understand what the world was like when they could just stand up and shout’ for what they believe in. The children cannot protest themselves, so Iris protests on their behalf.

Another protesters, Sita, who works to support survivors of domestic abuse, is acutely aware of the relevance of protest, and protesting the PCSC Bill, to her job.

Despite the many failures of our legal system to protect women from domestic abuse, those rights that are recognized have been won through protest, from the Suffragettes campaigning for women’s right to vote, to Sisters Uncut protesting for that same right for survivors of domestic abuse today.

Pushing back the shadow of such ‘heart breaking’ injustices is what motivates Sita to protest against the Bill.

For these protesters then, Kill the Bill is not so much about self-gratification as it is about securing a better future for those most in need.

Other Bristol establishment figures have been keen to give their version of the protests. A joint statement, released on March 22nd and signed by twenty-two city leaders – including the likes of the Bishop of Bristol, the chief executive of Business West, the vice-chancellor of UWE, and the Police and Crime Commissioner – portrays Bristol as a ‘city of hope’ whose qualities ‘will not be diminished by violence and criminality’ as represented by the protests.

What do the protesters themselves think of such statements?

For Kieran*, who works with young people in or at risk of entering the criminal justice system and has been attending protests as a volunteer medic, such comments are ‘a massive disservice’ to people such as himself who are trying to help keep protests safe and peaceful.

But more than this, the rhetoric of “us and them” that such statements push is ’dangerous. It paints [protesters] as less than human.’

Kieran is at pains to paint a different picture: ‘we’re not hatching ominous plans’ to cause violence. Instead, Kieran wishes for both protesters and those watching the protests to focus on the cause, the PCSC Bill itself.

Iris pours scorn on the claim that Bristol has been “a city of hope” throughout the last year. ‘I don’t think that people did come together in the last year’, rather, the perception that they did is the result of privilege.

Working with disadvantaged children, Iris has seen first hand how so many young people have been let down during the pandemic in terms of education, health, and mental wellbeing.

This is borne out by emerging evidence, for instance on the widening attainment gap as children return to full-time schooling. Families with computers and IT, with parents who can work from home have been able to provide a better educational environment than families without those advantages.

‘Where’s the help and unity for those kids?’ Iris asks; ‘they haven’t had it.’

‘So I don’t think that we have all come together in the last year. That’s a false statement.’

This disconnect between what our city leaders are saying and what those working to reduce inequality are actually seeing day to day represents, in Sita’s words, a ‘select elite feeling like this is how it should be instead of listening to how people actually feel.’

Marvin Rees, in his condemnation of the protests, has spoken of those ‘most likely to be marginalised and mistreated by our political and legal systems’. But he is careful to avoid any suggestion that the police might be complicit in that marginalisation and that mistreatment. Such blind condemnation of protest violence, Sita argues ‘leaves out any understanding of the history of people’s relationship with the police.’

Both Iris and Kieran comment on the fact that the children they work with have a near universal negative relationship with the police.

It’s a mindset, according to Iris, that children learn early in life. Children as young as 10 or 11, children who have never committed a crime or engaged in anti-social behaviour themselves, believe that ‘the police are something to worry about’ and not someone who will protect them.

Likewise, Sita speaks of how, in many cases, the police can’t or won’t help victims of abuse. There are many stories of police refusing to believe a survivor’s testimony, or even siding with a perpetrator instead. Such one-sided policing can ‘empower perpetrators to feel untouchable’, and thus allow abuse to continue.

Speaking to protesters gives a very different picture of the protests and of life in Bristol at the current moment more generally than the one people like Marvin Rees are trying to promote.

Far from being “politically illiterate”, many protesters feel that protest is the only meaningful vehicle through which they can have their voices heard. They protest in order to protect the communities to whom they are dedicated to helping from the effects of the PCSC Bill.

*Names have been changed.