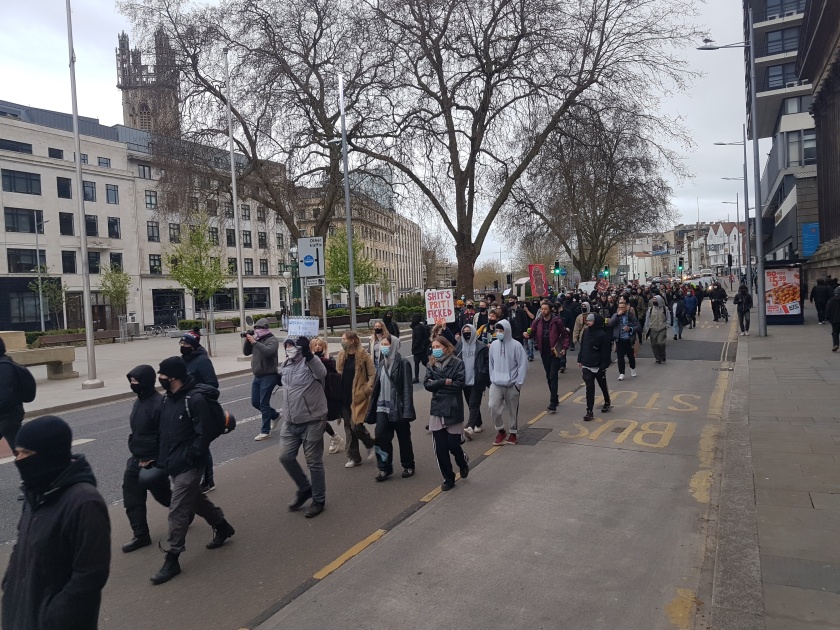 The protest, which saw a crowd of around 100 people march through the city centre for 2 hours. was a sedate affair in comparison to previous protests.

After six large protests in three weeks, the tactics of both protesters and police have adapted, and Friday’s protest seemed to signal a stalemate between the two sides.

As in previous protests, the march followed no set route, but kept police guessing as to where it would go next. At one point, protesters blockaded the Bearpit, at another they briefly held the junction of Old Market Street and Lawford Street before turning back towards the centre.

The police, meanwhile, deployed officers on bicycles to tail the march, and had pre-emptively closed the M32 at the Cabot Circus junction to prevent a repeat of the events of last Saturday which saw a larger group of protesters blockade the M32 for around 15 minutes.

Friday’s demonstration also appeared to show protesters grappling with the dynamics of unorganised protest. Impromptu debates were frequently held to decide which way to march next, with tempers on occasion fraying.

However, the protesters’ behaviour was without fault. After a sudden and dramatic arrest as the protesters marched down Rupert Street, protesters quickly composed themselves and continued the march.

And when the march ran out of steam around 21:00, the remaining protesters decided unanimously to call it a day, with one person standing up to say ‘we’ve made our point. Let’s go home.’

Last night represented a point of balance between protesters and police. With two more Kill The Bill protests already in the pipeline and more sure to follow, it remains to be seen whether that balance will hold or, if it tips, in whose favour it will fall.