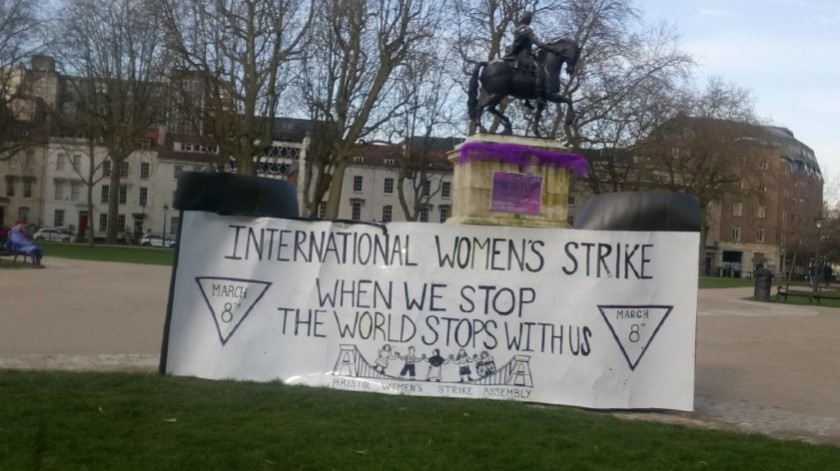 Activists gathered on Queen Square on Monday to take part in this year’s International Women’s Strike.

The small group decorated the centre of the square with purple cloth, a symbolic colour for the International Women’s Strike, and hung information posters and banners.

One activist, Paula, said ‘we’re here with our message: when we stop, the world stops with us.’ The strike is about ‘raising awareness of the work so many women do that remains invisible’.

This year’s strike takes place in the context of the COVID-19 pandemic, during which many additional burdens have been shifted onto women in the home.

A poll conducted by Mumsnet for International Women’s Day shows how women have taken on disproportionate amounts of housework, childcare, and other care work over their partners during the pandemic and lockdowns.

Paula explains that the strike itself is ‘not a labour strike’ but rather is symbolic. It is designed to raise awareness about the importance of this work that women do within society and what would happen if that work was not done.

Paula, herself a frontline essential worker, told me she had taken a day of leave from work to be at the strike: ‘I feel bad to not be at work. But this is an important issue.’

The pandemic has affected women in other ways, too. As another activist told me ‘this year’s strike is about a collection of issues. It is women’s work, but also it is domestic violence, which has risen under lockdown, it is about grieving for those we’ve lost to the pandemic.’

The Queen Square site included a banner advertising ‘drop-in public memorials’ for those lost ‘unnecessarily’ during the pandemic and ‘in solidarity with those who have cared for us’.

Find out more about this year’s strike here.